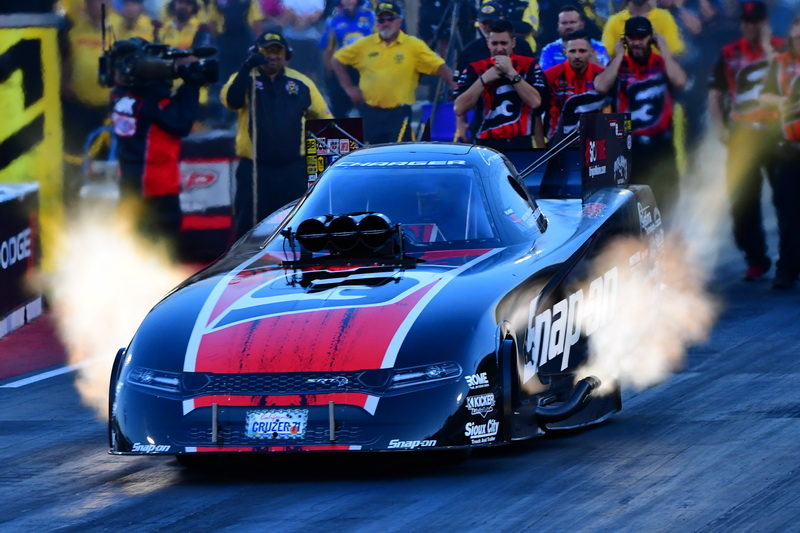 Success on the race track, that is.

And although it has been a while since Cruz Pedregon last sat atop a Funny Car ladder, on Friday it was just like old times as the veteran paced a sloppy first day at the 40th annual Dodge Mile-High NHRA Nationals presented by Pennzoil at Bandimere Speedway.

Pedregon, flexing his muscle for the first time since inking a new partnership with Dodge in the offseason, drove his Snap-on Tools Dodge Charger SRT Hellcat to the provisional No. 1 on Friday with a 4.002-second pass at 317.42 mph.

“It feels great. I didn’t think it would hold, to be honest. I felt like we showed our hand and let everybody see that there was some race track out there,” Pedregon said. “We all just missed it in the first run and I figured everybody would come back the next run and figure it out, but we kept reading the scoreboard and hanging in there.

“I’m happy for Dodge and Mopar and for what they do for the sport. This is my first time onboard with Dodge and I want to pay them back for their investment. They have supported us throughout the year. We’ve had some ups and downs this year, but I think the needle is pointing up and the Snap-on Dodge is starting to come around.”

The night session was in stark contrast to a dud of a first round as none of the Funny Cars made it down the track under power. Matt Hagan led the first session with a 4.324 at 232.43 mph, while Pedregon was last after round one before rebounding in session two.

“I feel bad for the fans after the first run, not a lot of cars made it down, but as I told one of our Snap-on guests, it is like baseball, everybody was swinging for the home run and they all struck out,” Pedregon said. “I think everybody got back to reality during the second run and made some good passes and we were one of them. This race track has been really good to me through the years and it is good to have a Friday like this.”

Pedregon is also seeking his first top qualifier mark since taking over crew chief duties for his own team earlier this year.

“I’ve had to do it myself (this year) out of necessity. When I am in the car, I don’t really think about it. I think about the car and whether I made the right decisions, but generally I don’t get any more or less satisfaction doing it myself,” Pedregon said. “I’ve had some great crew chiefs through the years and they have taught me a lot. But I am just happy for the team. These guys (put in) a lot of hours. They work late and I’ve not done a lot early in the year to reward them and give them a good car. So I am happy for them.”

While Pedregon expects times to dip further on Saturday, he hopes that he can continue this momentum, especially at a track that is known as one of the toughest to tame.

“We will see if it holds. It will go up incrementally, everybody will get a little quicker. Tomorrow night there are going to be some three-second runs, I just hope we are the best three-second run tomorrow.”

Get the @competitionplus Mobile APP to get your drag racing news quick and easy. – https://t.co/HsiKEmdZXO pic.twitter.com/qpgtrHqnpr

Find out more or adjust your settings.

This website uses cookies so that we can provide you with the best user experience possible. Cookie information is stored in your browser and performs functions such as recognising you when you return to our website and helping our team to understand which sections of the website you find most interesting and useful.

Strictly Necessary Cookie should be enabled at all times so that we can save your preferences for cookie settings.

If you disable this cookie, we will not be able to save your preferences. This means that every time you visit this website you will need to enable or disable cookies again.